Maria Stefossi was born in Athens where she lives and works. She initially studied draughtsmanship and in 1978 took up an interest in photography. Having graduated from the AKTO and PHOTOKINISI schools of photography, she attended many photography workshops and seminars run by well-known photographers.In 1988 she went on to join the Greek National Tourism Organisation working there as a photographer and graphic designer. Since 1997 she has been a freelancer and publisher, focusing on photography and travelling widely in Greece and abroad for her work, and designing and editing art catalogues and other art-related publications. She has collaborated with some of Greece's leading museums such as the National Gallery, the Museum of Cycladic Art, the Benaki Museum, the Thessaloniki Museum of Contemporary Art, the Thessaloniki Sport Museum, and others, designing art catalogues for artists such as Samaras, Akrithakis, Antonakos, Xenakis and others. The Ministry of Culture also employed her services on the European programme, the 'Routes of Orthodox Monasticism', where she produced the photographs for, and designed a set of three guides for the programme.

She has published ANCIENT THEATRES as well as ANCIENT STADIA and numerous photography and travel books. 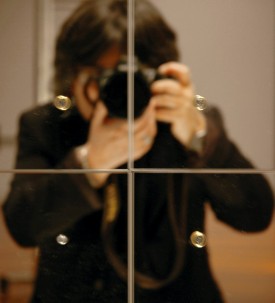